Some Observations on Law Firm Leaders (I)

Over the past 20 years, I have observed a range of leaders and leadership styles in professional service firms. Over this same period, there has been an exponential increase of interest in the subject of leadership, and the crucial role that it plays in the success (and occasionally the failure) of law firms. This case study consolidates these observations and suggests a descriptive framework aimed at increasing understanding and effectiveness in this area.

For the purposes of this case study, the leader is defined more widely than simply the managing partner or senior partner, to encompass the heads of practice groups, the plateau equity partners and the members of the various committees, which make up the governance structure of firms.

Professional respect as a driver of behaviour

An important pre-qualification for anyone contemplating a leadership position is that they command the unquestioned respect of their peers. They must be a high-performing professional first if they are to be given the opportunity to earn their spurs as a leader. It may be illogical, but it is a truism of any professional service organisation.

At the same time, letting go of fee-earning work can be a real challenge in the transition to a leadership role. Such a step into the unknown represents a high-risk move – the gradual erosion of power, which emanates from key client relationships combined with the career limitations of immersing oneself in the management of a firm.

For some, this is avoided by simply treating the new role as a badge of honour or status, rather than an impingement on their fee-earning role. This is an opportunity lost, both for them and for the firm. My observation has been that others adopt one of a range of behaviours that define their tenure of leadership. These behaviours are described in more detail further in this case study.


From the huge range of approaches and behaviours adopted by law firm leaders, a small number of traits can be distilled into a framework, which is both simple and useful. In particular, two pervasive and important dimensions rise to the surface. They are:

From these, a model can be constructed which highlights four behavioural types, each of which is explained in more detail further in this case study. 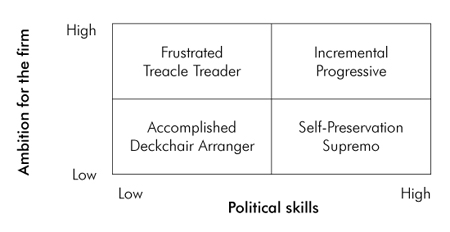 
This is the leader with negligible political ability and a low ambition for the firm. On the face of it, it is puzzling that such a psychotype could ever figure in an analysis of law firm leadership. In fact, there are many examples of the ‘Accomplished Deckchair Arranger' prospering (and indeed being sought out as a future leader) in law firms everywhere. From the perspective of other partners, these types have two great advantages: they do the administrative work that no one else wants to do, and they don't try to interfere with the status quo. They are harmless, likeable and non-threatening.

This quadrant is typified by the leader whose focus is on the operational efficiency of the firm's back office. Their forays into management will impinge on practice areas, but only insofar as it does not affect the preferred working practices of the partner group.

While the ‘Deckchair Arrangers' may have personal ambitions, their drive to develop their firm is not so great so as to risk confronting unhelpful behaviours. In other words, they are not political animals. Without a strong cultural perspective and deep understanding of the political aspects of decision making dynamics that affect their firm, they will find themselves floundering.

This is not to say that the firm will not grow or be seen as ambitious from the outside. The key point is that, in this sort of organisation, ambition flows from individual partners and a culture which demands progress. Indeed, for some firms in this category, the collective will of the partnership acts against the election of anyone who may attempt to usurp their personal ambitions for one that is more cohesive and (necessarily) directional.

A second category of leaders is defined by the person with huge ambitions for their firm, but lacking the political wherewithal to take their firm forward with them. For these leaders, often operating in an analytical and logical fashion, the potential of the firm will be clear. Their route-map to lead the business to future success will be well-articulated. However, they will fail to bring people with them due to a poorly-tuned political or cultural antennae. With an inability to win hearts and minds through barnstorming inspiration or Machiavellian manipulation, they are often left to bemoan the general malaise that affects their colleagues.

Finding themselves mired in negotiations, filibustered at meetings and frustrated, they perceive a partnership ranged against them; doing everything possible to slow the rate of progress and minimise the impact of any changes on their personal position.

The ‘Treacle Treader' has a view of the sensibilities and sensitivities of the partner group as a whole, and realises too late in their often short-lived reign, that raw ambition alone (even when coupled with a formidable intellect and determination to make progress), will never be enough to overcome a partnership steeped in historic norms.

Some leaders are all about self-preservation, and they have the political nous to see off all-comers. Their energies are focused on the maintenance of personal position more than the betterment of their firm. Young pretenders are seen off, and rivals are ring-fenced before being exited, while non-submissives are ostracised.

Over time, they exert an iron-grip of control, which is reinforced by the stories and folklore of the organisation recounting the demise of those who have been challenged in the past.

Fawning acolytes reinforce the position of these benevolent dictators whose firms or practice groups seldom prosper, but seldom crash either. They simply bumble along, underperforming their apparent peers, but surviving nonetheless in a steady sort of way.

In truth, this is the most damaging behavioural type for the long-term future of the firm, because these leaders have tremendous staying power. They may not be the right person for the job (and this may be clearly apparent to everyone involved), but they take some shifting.

Published in Leadership Development in the Legal Profession
November 2008